The first prototypes of the DiscFerret hardware are now in the hands of developers -- we're aiming for full production around mid-Summer or early Autumn! Keep checking back, and feel free to join us in #discferret on irc.freenode.net!

DiscFerret is a combination of hardware and software that allows a standard desktop computer to read, analyse and decode the data on just about any floppy disc, and some MFM and RLL hard disc drives. This includes standard formats like PC DOS, but also more unusual formats like AmigaDOS and the Intel MDS M2FM format. Imaging is performed at the lowest possible level -- that of magnetic transitions, which allows everything which can be represented on-disc to be imaged.

An IRC channel for support and development has been established. Please join at #discferret on irc.freenode.net. 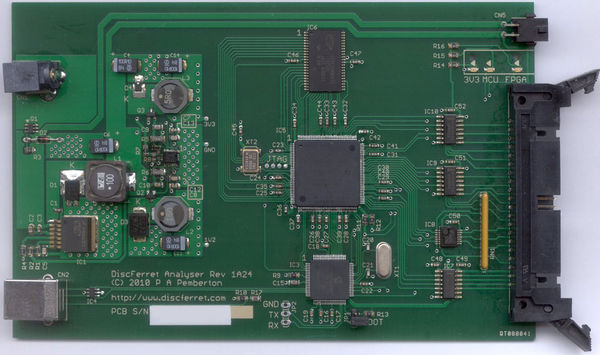